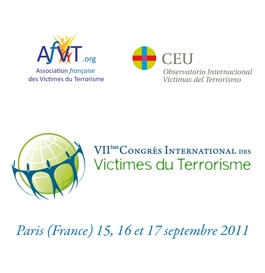 This VII International Congress of Victims of Terrorism will take place on September 15, 16 and 17 of 2011, in Paris.

On this occasion we wish to welcome in Paris victims of terrorism from all over the world and increase the representativeness of the victims from the Middle-East, the Maghreb, Africa and Asia, who are at the present time the most affected by the terrorism areas.

Among the different topics which we would like to tackle in this Congress, there are :

• The impact of a terror attack on the familial environment of the victims, in a short, middle or long term;
• The link between the victims and the society, through the Spanish positive example.
• The fight against terror organizations through the French-Spanish example against ETA.
• Information & vigilance, communication during the hostage-taking, the support of the families during and after and the ex-hostages ;
• The enlistment of young people to justify or to take part in acts of terrorism ;
• The responsibility of the international organizations when their employees become victims of terrorism through the example of the UNO, aimed in Baghdad and Algiers.

This event will be announced to the Spanish, French and international media during two events, in Madrid first, then in Paris, on September 14th and 15th, 2010.

The French Association of the Victims of Terrorism will organize, in one year, the VII International Congress of Victims of Terrorism, in Paris, on September 15th, 16th, and 17th 2011. The agreement will be signed in the San Pablo CEU Foundation, in the presence of victims of terrorism and the Spanish media.

Wednesday September 15th 2010: Press Conference in Paris, at 3 PM, at the CAPE (Grand Palais) Presentation of the VII International Congress of Victims of Terrorism in the presence of victims of terrorism and members of the International Center for the Victims of Terrorism in Paris, at the CAPE (Centre d’Accueil de la Presse Etrangère) Grand Palais, Cours de la Reine – Perron Alexandre III 75008 Paris.

We count on your support, all along the year to prepare a congress which will mark a milestone